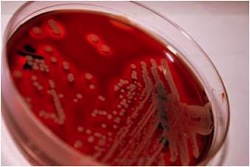 I believe that the rapid spread of antibiotic resistance should be recognized as an urgent public health priority – possibly the #1 priority. E.g., CRE [1].

After reading Betsy McCaughey [2] “U.S. Lacks Will to Fight Superbugs” [3] I tweeted the citation for her op-ed

@stevedarden I’m kind of perplexed by the media repetition of “fighting superbugs” – what do ppl expect anyway? Some secret weapon?

What an excellent framing question! I replied with some suggestions:

“@drricky: @stevedarden but problem is most of these are preventative, what is expected when MDR {Multi Drug Resistance} is detected?”

I replied over several tweets: By #2. what I meant is that the CDC publishes “best practice” on procedures to execute upon every identified case of MDR[4]– beginning with effective quarantine and decontamination. The “best practice” level of response is mandated to be the minimum response. It should be the top priority of the hospital to eliminate the detected microbe from the institution. I appreciate that is a statistical goal, as we have no way to validate that “we killed it”.

For examples of such best practices consider the 2011 NIH Clinical Center response to a CRE outbreak [5], and of Israel 2006 (from Betsy McCaughey):

When CRE invaded Israel’s hospitals in 2006, public health authorities launched a military-style campaign requiring reports from all hospitals, which were ordered to test patients and undergo rigorous cleaning efforts. This reduced CRE by 70 percent in one year. Israeli researchers just announced a drug that may protect patients exposed to CRE from becoming infected.

My personal bias is that regulation is a blunt and ineffective tool in complex, fast-changing domains like this one. My question: How to incentivize hospitals to succeed?

Suggestion: first try transparency. E.g., if the Johns Hopkins data, such as MDR cases, hand hygiene and infection-control scores are published on the web every month – that is a powerful incentive to improve – to be ranked among the very best institutions globally.

Meanwhile Doc Ricky tweeted a critique of my first try on agriculture:

@stevedarden The agriculture issue is more nuanced than that, after all, how does one exactly limit the use?

@drricky Legislating detailed Rx rules not practical. How about transparency of farm usage per animal-KG? Is public shame effective?

I am thinking of the Denmark experience beginning 1999 where they succeeded to eliminate NTA use in agriculture. See my 2010 Denmark: results of stopping NTA (non-therapeutic antimicrobials)

Doc Ricky moves the discussion to the next level, biology:

@stevedarden only skirts around the real problem, which is biology. We culture animals with similar physiology to ours

The microbes shared by humans and pigs, chickens, beef are why we are so concerned about agricultural applications of antibiotics. Agriculture uses roughly 80% of the antibiotics effective in the human population – but in vastly larger quantities. If we were all vegetarians that would eliminate the whole worry about agriculture.

Doc Ricky is truly the expert in this topic – I’m looking forward to learning from him. We agreed to shift the conversation from Twitter to a long-form-friendly fora.

7 thoughts on “How to protect effective antibiotics: a conversation with Doc Ricky”