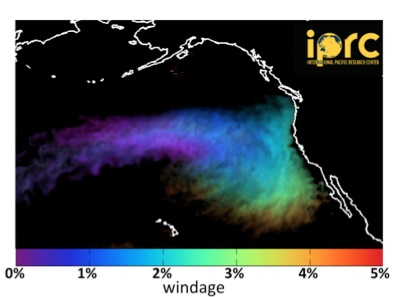 Click the model static frame to display the animation

We have a direct personal interest in evaluating the 2014 risk of debris-collisions in the captioned North Pacific area in 2014. We will be sailing from NZ to Alaska again via Tahiti and Hawaii. There is always ocean debris – plastic flotsam, and dangerous debris from fishing nets and fishing gear to shipping containers. And we have first-hand experience with the too-common incidence of logs and trees floating near shore and in the channels of the Pacific Northwest.

The reason we are concerned about the open ocean Hawaii-Alaska tsunami debris is the possibility of high incidence of the semi-submerged heavy objects that can put holes in the boat. The alert watch-keeper will not see these dangers ahead when sailing fast at night. Collision with logs, trees, fuel drums, docks at 12-15 knots — that’s an event we would prefer to avoid. The IPRC sightings describe the Kalama Beach log at left as “Large log, length app. 20′, diameter app. 3′.”

It’s challenging to assess whether dangerous-collision risks are materially greater post-tsunami. What is missing is the perspective: “how different is it today from background?” I’ve analyzed that question regarding the radiation/contamination risks. E.g., the media hyperventilating about Fukushima impacts on the Pacific Ocean. I think I understand the Pacific Ocean contamination risks fairly well. The contamination analysis is easier because we have a sound series of observations combined with a good theory.

We are accustomed to access to data on ocean conditions based upon satellite observations. Near real-time temperature, currents, and sea state are available for most of the planet. Unfortunately the satellite imagery doesn’t tell us about the collision hazards that could be waiting for our yacht (two hulls, twice the collision opportunity, right?). The reason is that the Tohoku debris is so dispersed and physically small that it has not been detectable by satellite imagery since shortly after the March 2011 tsunami. The NOAA special website on the Tohoku debris is a good place to begin your research. Next is the NOAA Severe Marine Debris Event Report: Japan Tsunami Marine Debris of June 2013.

Because of the size of the potential debris area and the narrow coverage of high resolution satellite imagery, it became clear that a full coverage survey of the situation was not possible or practical. Shortly after the tsunami, a variety of types of satellite imagery (e.g., ENVISAT, LANDSAT, SPOT, ASTER) became available from a variety of sources, including U.S. Geological Survey, the International Disaster Charter, the European Space Agency rolling archives, and a joint NASA/JAXA Web site. This imagery was analyzed by …(NOAA) NESDIS … and indicated fields of debris that were visible in 15–30 m resolution data. More recently, the National Geospatial-Intelligence Agency (NGA) has provided NOAA with higher resolution (1–5 m) satellite imagery.

Although debris fields are no longer visible by satellite, dispersed, bouyant items continue to float in the North Pacific. This assorted debris, referred to henceforth as Japan Tsunami Marine Debris (JTMD) ranges from derelict vessels and large floating docks to small household items, with fishing gear and construction items of various sizes and compositions in between…

Because we do not have wide-field satellite data we know very little about the actual mass and spatial density of the debris distribution. Our data sources are primarily coastal observations of objects deposited on beaches (Midway, Hawaii, NA mainland of CA – OR – WA – BC – AK, plus a few random observations from sailors at sea.

NOAA GNOME model: With so little empirical data our picture of what is out there in the Pacific comes largely from modeling. There are two primary models that we have identified, the NOAA GNOME model and the IPRC model. NOAA periodically updates their summary page about the latest GNOME predictions: NOAA Tsunami Debris Model Sep 2013. The NOAA update page is a concise introduction to the modeling. The next graphic shows the big picture, extracted from that NOAA page. The hatching denotes the predicted highest density of debris with 1% windage at the end of the simulation. 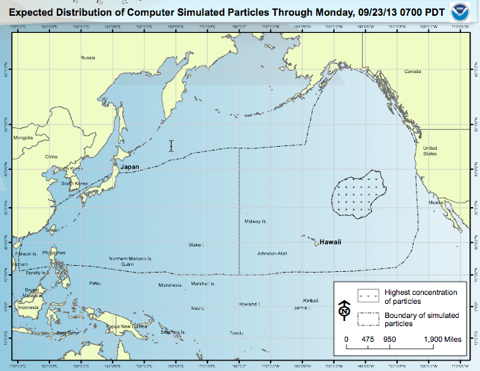 IRPC Model: This model is publicly available, run by the International Pacific Research Center Marine in the School Of Ocean And Earth Science And Technology at The University Of Hawaii. My understanding is that IPRC updates the model initialization and parameters based on observations – so the near term model frames are closer to reality than far future. The model doesn’t really tell us about concentrations of threatening semi-submerged objects. It does however give us a visualization of what we can infer from the current/wind drift physics.

Click the model static frame to display the animation

This link to the IPRC Tsunami Debris Models page provides a tabulation of the most recent model runs for 0% to 5% windage levels. The January 2014 prediction frame correlates with the reports of deadheads in the area from Hawaii to the west coast of the US. The visualization shows the higher windage debris rapidly drifting east to the shorelines of Alaska to California, while the deadheads and similar collect in the area east of Hawaii.

On the ground observations:

In sailors terms, 1% windage is typically a “deadhead”, an almost totally submerged tree or equivalent timber [Windward Oahu report]. That is what the owner of the 72-foot trimaran Lending Club/Tritium Racing, John Sangmeister, thinks they hit multiple times during the 2013 Transpac race from Los Angeles to Hawaii.

The image at left is of one of the damaged foils aboard Lending Club. We do not wish to be taking such snapshots on our passage through those waters. On the collisions, Kimball Livingston reported:

The first time they hit, they slipped the daggerboard out of its housing, flipped it over and went on with business. Then they hit another time, and re-flipped it, and they’ve hit a few more times without major damage, but wow. The all star crew included Gino Morrelli, Howie Hamlin, Ryan Breymaier and Peter Stoneberg. One interim report: “Logs, logs, and more logs. Sailing normally, but with a large amount of vibration due to the damage.”

We have similar first hand reports of collisions with semi-submerged object from a Kiwi friend who was sailing in the same Transpac fleet. During daylight they could see logs and trees in various stages of submersion.

**Large pieces of debris, a couple of pieces of lumber looked like parts of a house

So, what do we know from “on the ground” observations? Every country and state bordering the North Pacific has debris reporting schemes – based upon shore or near-shore sightings. NOAA collects sighting reports for the North Pacific (via email to DisasterDebris@noaa.gov if you have a sighting to report). Here are the maps of the sightings reports. Unfortunately “the absence of evidence is not the evidence of absence”. In this case the absence of reports may well indicate an absence of vessels to sight debris. Here is a clip from the November 2013 overview map: 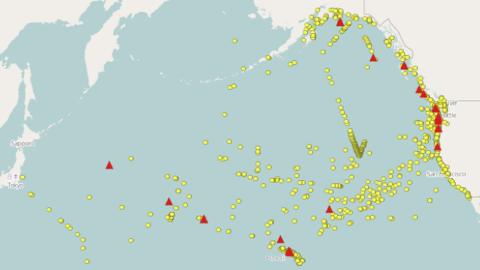 These general sightings reports are not useful to us. An animation showing the date of sighting would give some very general indication of trends – that would be useful. And the majority of the reports are high windage items that aren’t a threat to us. As I write the most indicative observations are from the 2013 Transpac reports like Lending Club. Please email us if you know of any other first-hand sightings reports – especially of the type that threaten small boats like ours.

A map of the Gulf of Alaska, BC, Washington and Oregon. An example of predicted debris concentrations (derived from satellite-tracked ‘drifters’) show Alaska is an immense accumulation point. (Figure adapted from Lumpkin et al. (2012))

Journey To The Center Of The Gyre The Fate Of The Tohoku Tsunami Debris Field  by Peter Franks in the Integrative Oceanography Division of Scripps Institution of Oceanography. Very descriptive of marine environment impacts, but not relevant to potential impacts with trees and large wooden structures.