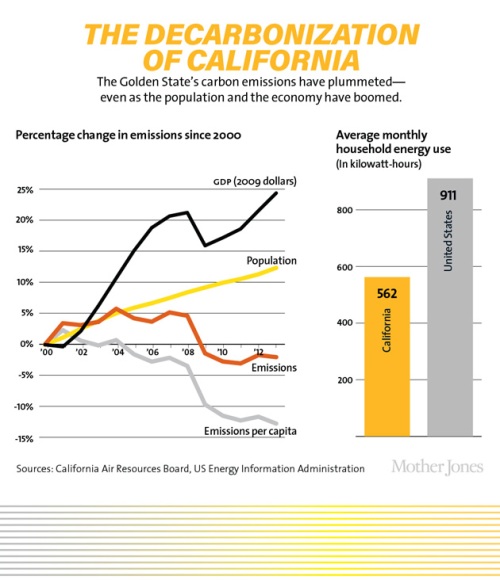 If you ask a random citizen of the state “Is California decarbonizing faster than the rest of the U.S.?” they are likely to reply “Of course, California is the leader!” This accepted wisdom was reflected in the recent Mother Jones article by Gabriel Kahn [@gabekahn] Did California Figure Out How to Fix Global Warming?.

All of these advances have undercut a fundamental tenet of economics: that more growth equals more emissions. Between 2003 and 2013 (the most recent data), the Golden State decreased its greenhouse gas emissions by 5.5 percent while increasing its gross domestic product by 17 percent—and it did so under the thumb of the nation’s most stringent energy regulations.

As the chart above shows, California is decarbonizing, but how exceptional is California’s performance since 2000? In reality, California’s results are not exceptions, but representative of the nation. For the same 2000 to 2013 period discussed in the Mother Jones article, here is a graphic showing California and U.S. greenhouse gas emissions decreases as a function of GDP [thanks to John Fleck for graphing the IEA, BEA and Census Bureau data].

Image: John Fleck [@jfleck]
And here’s John Fleck’s graphic showing how California’s per capita emissions compare to the US as a whole.

From the time series graphs it’s hard to judge whether California’s results are better or worse than the US average. Mike Shellenberger [@shellenbergerMD] aggregated the EIA 2000-2013 decarbonization data to demonstrate that the nation reduced emissions more than California. This doesn’t account for emissions that California exported to other states (e.g., for power generation) or other nations (e.g., China for the embedded energy in imported goods).

Mike has also been analyzing the favorable tail wind provided by crashing natural gas prices. Low gas prices have hidden from the consumer the true cost of subsidizing (non-large hydro) renewables. The US has been enjoying historically low natural gas prices. The lows are an anomaly caused by the local oversupply of U.S. shale gas. The oversupply situation is local to the US because it’s difficult to export natural gas. There are long lead times and large capital investments required to expand gas export infrastructure. Once the excess supply can be freely exported the US natural gas market will clear much like crude oil. Then US consumers will be paying a lot more for natural gas.

For his hypothesis that California has outperformed on decarbonization Gabe Kahn mainly credits politicians backing mandates and subsidies for wind and solar. Missing is discussion of all of the factors that contributed to the reduced emissions intensity. Nationally the two biggest contributors have been the Great Recession (falling demand) and fuel-switching from coal to gas. The Breakthrough Institute published a 2014 report Natural Gas Overwhelmingly Replaces Coal: New Analysis of US Regional Power Generation Between 2007 and 2013. US emissions intensity fell largely due to fuel-switching:

Changes in generation shares at the regional level, however, strongly support the conclusion that fuel-switching from coal to gas, along with falling electricity demand in the wake of the Great Recession, account for the vast majority of the decline in emissions. Moreover, the shift from coal to gas accounts for a significant majority of the decline in the carbon intensity of the US electrical grid since 2007.

Study the above 2014 chart. The biggest elephant in the room (not discussed by Gabe Kahn) is the serious negative impact of activist attacks on the state’s nuclear plants. The premature closing of SONGS cost the state almost all the gains of twenty years of building subsidized wind and solar — California’s decarbonization rate took a big step backwards.  James Conca explains:

Going backwards: the San Onofre Nuclear Generating Station (SONGS) was prematurely closed January 2012. Now the same activists are trying to shut down California’s only nuclear power station Diablo Canyon — which is quietly producing every day about 1.6 times the output of all of California’s solar power. It will be impossible for California to achieve zero-carbon by closing rather than building new nuclear plants. In California Gets Coal for Christmas: SONGS Closure Produces Extra 18M Tons of Carbon Dioxide James Conca reviews the reality:

A state-funded study by the California Council on Science and Technology found that only significant nuclear, or obtaining as-yet-undeveloped carbon capture technologies, can solve California’s energy demands and emission goals in this century (CCST Summary; CCST Report to 2050). We geologists know how unlikely carbon capture and storage is, and we should keep trying, but we can’t bet the house on unknown technologies.

The California’s Energy Future report that Jim references is a very good piece of work. See my report on the 2013 Travers Conference at UC Berkeley for updates on the study. You can help by supporting Save Diablo Canyon.

So how is California doing relative to our two degrees target? Poorly – and most people don’t appreciate how incredibly challenging it is. Two years ago Price Waterhouse Coopers estimated that a global compounded decarbonization rate of 6.2% per year would just get us to zero-carbon by 2100. California’s 7.5% over thirteen years is way short of 6.2% compounded — it is not much better than the dotted line in the this PWC chart, and not nearly good enough. When was the last time we saw nations decarbonize rapidly? It can be done.

4 thoughts on “Decarbonization: Is California Exceptional?”